Coffee, caffeine, energy – Starbucks is great for all of these things. You might find yourself craving a drink from your favorite beverage store other than coffee to boost your energy. So, does Starbucks have red bull?

I love Starbucks’ coffee and I walk past one about every day, but sometimes I need a break from coffee. When you become a loyal customer of Starbucks, you’ll find that there are some things they don’t carry but want you to want to spend your hard-earned money on. For instance, Starbucks does not have Red Bull but it has its own brand of energy drink that you can buy at any of its stores.

Does Starbucks have a drink with Red Bull?

No. Starbucks does not have any drinks with Red Bull. It does not sell Red Bull drinks either. Red Bull is a separate energy drink company and BAYA was created by Starbucks, hence the competition.

In 2012, Starbucks attempted to compete with Red Bull by introducing more innovative drinks. However, nutritionists warned that the high caloric and caffeine levels of existing energy drinks such as Red Bull is doing great harm to our society. Starbucks promised a healthy version of an energy drink that would boost concentration and increase energy levels to work like a zombie.

Does Starbucks have Energy Drinks?

Yes, Starbucks has its own brand of energy drink! In 2012, Starbucks not only became a coffee hub but a producer of energy drinks. The company made “natural” energy drinks called Refreshers that are sold at grocery stores and Starbucks locations. These beverages give people more focus and help them accomplish their day’s tasks faster.

Starbucks was keen on providing a refreshing drink with low calories and this is exactly what they’ve done. Starbucks’ drinks are made from an extract from a flavorless green coffee, which means they’ve received low calories. They also have ginseng, which only adds to the health benefits. It comes in three flavors:

Consumers seeking a combination of caffeine and antioxidants might want to take a look at BAYA which was recently released by Starbucks. The drink also has Vitamin C, an antioxidant that strengthens the immune system to provide consumers with endless energy.

BAYA is one of the new ready-to-drink energy drinks that Starbucks has introduced in the US. The drink comes in three flavors, raspberry lime, pineapple passionfruit, and mango guava. You’ll find it in most Starbucks stores or can buy it online for home use.

When it comes to BAYA, the price per can is $2.89. Consumers can drink this energy drink on the go and there’s a good amount of calories, which are helpful for health purposes. A 12 oz Red Bull has 160 calories while a BAYA energy drink has 90.

No, the rumor about Starbucks having a drink with Redbull was false.

Yes, you can get one from Dutch Bros.

Alternatively, you can make your layered own by:

If you layer it just right, the cocktail should be as colorful as red, blue, and white until you stir it up to drink. 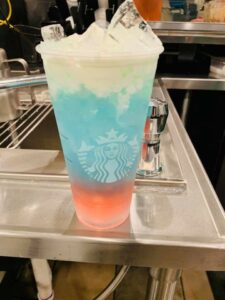 Does Starbucks have a Red Bull Drink?

Now that Starbucks has launched a Red Bull competitor, it’s no longer the company’s only energy drink. The new drink is called BAYA, and it was developed to innovate other drinks that are similar to the ones offered by Red Bull. Starbucks expanded into the refreshment space in 2012 to battle against its rival.

Target doesn’t actually own any Starbucks locations. They license that name and everyone who works there are Target employee. So, it’s not the real thing.

If you’re looking for a long-lasting energy drink, keep it out of direct sunlight, and store it anywhere around room temperature. That’s because the drink will usually last between six and nine months.

What Drinks at Starbucks Give You Energy?

Does Starbucks have Energy Drinks? Yes, it does.

If you need a little bit of energy to push through the day, why not try Starbucks’ new Nitro Cold Brew? The Nitro cold brew is infused with nitrogen so it gives you an energizing effect. It has 280 mg of caffeine in a grande, and the combination of taster into an iced coffee brings with it a sweet and soft taste. The Nitro Cold Brew comes in three great flavors: black, vanilla sweet cream, black, and dark caramel.

What is the Most Energizing Drink at Starbucks?

Hot-brewed coffee is the most popular drink at Starbucks. It has high amounts of caffeine to energize you right away so your day can begin. The Blonde Roast contains 360mg of caffeine, while the Dark Roast has 260mg of caffeine.

Does Starbucks have Energy Shots?

Yes, and these energy drinks are called Refreshers and were introduced by Starbucks in the year 2012 to increase energy and now have BAYA. They’re found in all Starbucks locations across the US.

What is the Most Popular Energy Drink?

Even though Red Bull isn’t the cheapest energy drink available, it’s still the most popular. Its sales have increased by 5% every year since 2013.

What is the Most Energizing Drink at Starbucks?

Any one of the BAYA drinks at Starbucks outlet would get the job done.

No comments to show.